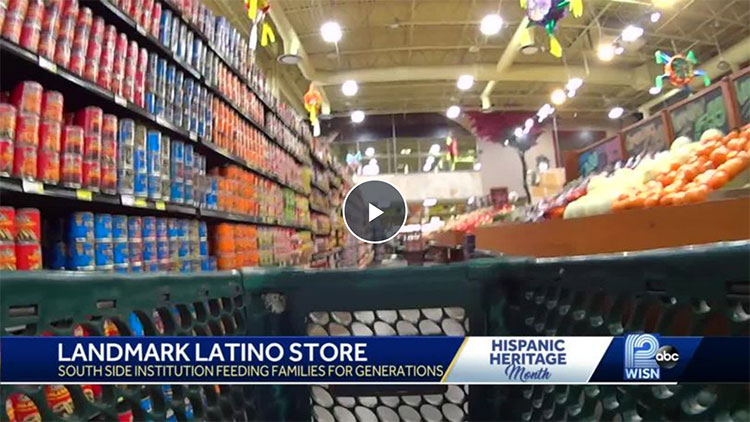 MILWAUKEE — One of Wisconsin's largest Hispanic-owned companies started in Milwaukee.

The last living founder spoke to WISN 12 about how they came to be a staple in the community.

It's not unusual to find Ernesto Villareal at El Rey's grocery store.

"A lot of customers even call me by name, Ernesto, a lot of them, it's incredible," he said.

With more than 40 years in business, customers have gotten to know them all.

Cruz Valeriano said he's been going to El Rey's since he was little.

"My parents, they're with me right now, so we're just enjoying the food, once again," he said.

"I like the feeling (of still being involved today). I like to see the customers," Villareal said. "Sometimes we become good friends. I still remember my first customer. He still comes to the store."

That first customer came in 1978, after Villareal and his brothers Heriberto and Armando opened a small store to supply Mexican goods and spices on South 16th and West Mineral Street.

"(We) right away became successful and then we moved to a bigger location, kitty-corner from the old location," Villareal said.

The Hispanic population was growing and there were no grocery stores catering to their needs.

"Before all this, they used to go to Chicago and buy the tortillas and bring them to Milwaukee," Villareal said.

Now with four locations, it's one of the largest Latino-owned corporations in Wisconsin.

For the brothers behind El Rey, the inspiration started on South 3rd Street and West Lapham Boulevard when they were teenagers.

Their dad ran a corner store and they wanted their store to feel as neighborly as his.

Today it has bright colors, music and vendors outside.

"It gives you a feeling of Mexico a little bit," Villareal said.

El Rey's has become a staple in Milwaukee's Hispanic community.